Outside of Alexander Thomson’s Holmwood House. 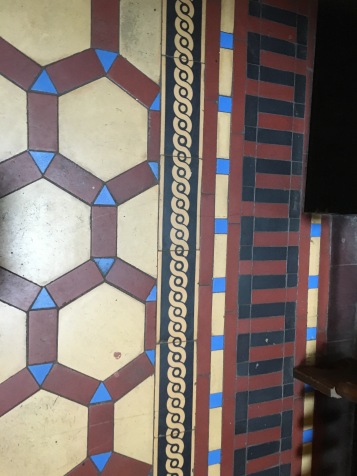 Detail of the hall floor

Hidden on the Southside of Glasgow is a spectacular sight. Holmwood House is a pure wee gem of a building which is under-visited, under-appreciated and often forgotten  by the everyday punter.  Rachael and I were lucky enough to be invited to an informal discussion day where we chatted about how the National Trust for Scotland (NTS) could promote, conserve, and breathe new life into this wonderful building.

Described as Alexander ‘Greek’ Thomson’s finest domestic design, the building is actually quite difficult to find (if you are not a Southside local and in the ‘know’) as there is a complicated one-way road system from the main street and one teeny-tiny sign. However, fear not!  The trip is worth it, even if you do get lost, as it’s a history geeks dream house. 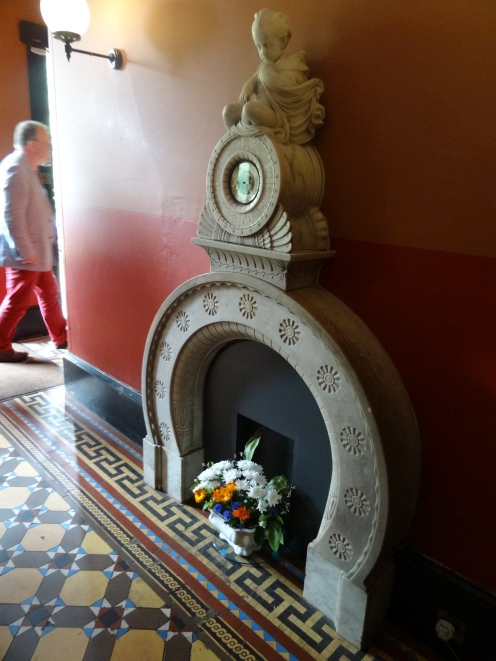 Upon arriving we were taken through the main hall, past an amazing white marble fireplace and into the dining room.  Holmwood House has a complicated history, the villa was used as a Catholic primary school (Our Lady of the Missions, now in Giffnock) for many years (c.1958 – 1992).

During its life as a school, the dining-room was used as a chapel and to this day you can still see the confessional box in the back left corner of the room.

The complicated time-line and the villa’s colourful history was one of the pressing issues being addressed at the discussion day. How should the house be presented to the public?  Should the story of the school be told, and if so in what format? What objects would be appropriate to display considering the original design aesthetic? Although many issues were raised, such as the poor signage and lack of public transport to the House, over a marvellous spread of tea and cream cakes I might add, it became apparent that the House was in safe hands. The group who had gathered to discuss Holmwood’s future consisted of respected art dealers, curators, archivists, heritage professionals, university lecturers and others from like-minded organisations.

After an exceptional talk by V&A Curator of 19th-century furniture, Max Donnelly, we were treated to a tour around the House. Moving from room to room, more and more questions were raised by the group; ‘Should the bedroom have stars on the wall?’, ‘Surely, originally the stars would’ve been on the ceiling?’, ‘Why is there no toilet in the master bedroom?’ ‘Is this carpet appropriate to the designers  overall design aesthetic?’ and so on and so forth!

With these questions came positive suggestions; ‘What about an oral history project portraying the villa’s every changing social history?’, ‘Should we start a working group?’, ‘Have you ever thought about designing a Southside walking trail? If, so I know potential funders!’.

Although the session was only half a day, I do think that important connections were made and that Holmwood House has an extremely bright future.

I cannot stress enough how lucky Glaswegians are to have such a brilliant example of Alexander ‘Greek’ Thomson’s work right on their doorstep. If you’ve not been to visit Holmwood House why not have a look on the National Trust website,  have a swatch at what you’re missing out on.  The House is normally  open 12-5pm Thursday to Monday and entrance is a real bargain at £6.50 per adult, especially as it has a beautiful wee garden, perfect for picnics, and a vegetable garden with an honesty box for purchases of the produce.  We higly recommend a visit.