Hope you’re all having a good January so far, if not never fear, there are eleven more months to make it up. Today we are chuffed to present another lovely Guest Post, this time about a personal history rediscovered by an intrepid researcher, take it away Clare.

Clare Thomson is a librarian in Special collections in the Mitchell Library, Glasgow. She studied Scottish History at the University of Glasgow. She is also interested in family history, women’s history and has been heard to say that dead people are more interesting than the living. She is also a mental health activist.

“‘First woman to hold the office’ became almost a commonplace in her career.”

I first came across this historical figure when I was working through some scrapbooks in the Mitchell Library. Roberton donated many of her keepsakes to the library, like Queen Margaret College matriculation cards, and a membership card for Hamiltonhill Social Football Club. She seemed like a well-rounded chap, so I decided to find out more about her life.

Violet Mary Craig Roberton was born in Glasgow in 1888. After her early education at Park School, she matriculated at Queen Margaret College, a women-only educational establishment in Glasgow. There she studied English and French literature between 1905-1908. Her obituary also states that she went on to study music at Dresden. Despite this interest in education, she returned to Glasgow sometime before 1915 and began her long career in public service. 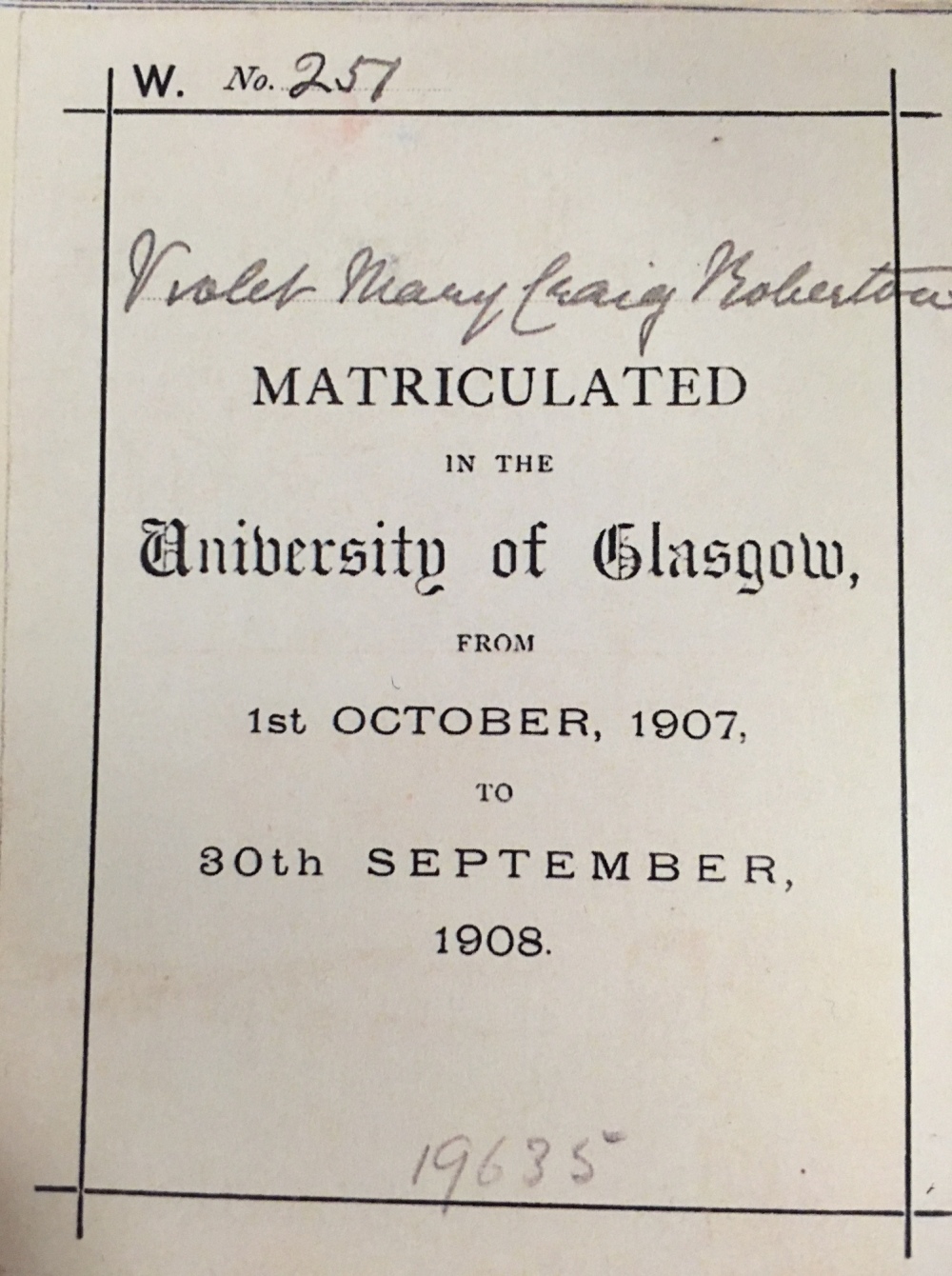 Her parents were Janie Reid & William Craig Roberton, a solicitor, and her grandfather was Sir James Roberton, a solicitor, whose brother was the famous Lord Provost Stewart, whose name is associated with the acquisition by the city of Glasgow of the Loch Katrine water supply. Clearly, the house in which she grew up would have been one which was dedicated to public service, and she would have been surrounded by a discussion of the civic life of the city.

In 1915 she signed the temperance pledge, during Glasgow Temperance week. This event followed the Temperance [Scotland] Act of 1913, under which voters in small local areas were enabled to hold a poll on whether their areas remained “wet” or “dry”. Much of Glasgow returned a vote that meant that no new establishments should be opened. The pledge signed by Violet promised that she would “abstain for all intoxicants during the period of the war”. (Glasgow Scrapbook vol 5, Mitchell Library). The 1913 act was the end product of many years of the movement in Scotland, which recognised the social problems caused by alcohol; violence, domestic violence, and lewd behaviour.

In 1921 she was elected as a magistrate and local councillor for the city of Glasgow. The role of the magistrate was and is a voluntary one. Her first year in office saw her serving on committees for parks, tramways, health, baths and wash-houses, building regulations and chemical laboratories. She worked with a number of other female councillors, such as Jean Mann, who later became a bailie of the city, Florence Mary Morrison, Kate Beaton, Mary Maclean, Edith Alexandra Fairbairn, and Angelina Selby.

A few years later, in the 1923 general election, she stood as the Unionist candidate for the St Rollox ward, but she was not successful. She also stood in 1948, at the age of 60. Some significant honours awarded to her were the CBE in 1928, an honorary doctor of Laws from the University of Glasgow in 1943, and in 1952, she received the St Mungo prize as “the person who has done most in the past three years for the good of the city by making it more beautiful, healthier, or more honoured.”

Her obituary in the Glasgow Herald described her thus:

“Her interests were many and varied, but she brought to everything she did, and to everything with which she was associated a sense of dignity and stability. Although she was never a feminist, her work for children and womens’ interests will long be remembered. Her charm and manner and her voice were a delight to her friends and her knowledge of local government made her advice and judgement much sought after by her colleagues at City Chambers.

Despite the many calls on her services she always found time to deal with the numerous individual, personal problems which came her way. A firm believer in upholding right and justice, she admitted no compromise between right and wrong. As a magistrate she could deal with her cases in a manner which was firm, and, sometimes even stern. Nevertheless she had a way of always bringing the best out of everyone, and many benefited from her advice.

Having democratic views, she accepted defeat gracefully, if it came her way, and she was always ready to help the victors, standing as she did for all that was best in voluntary service, as will long be an inspiration to us all”

At various times in her life, she travelled, to Australia & California (1920), Demerara (1933) and Honolulu (1948). She was born in, and lived much of her life at 2 Lynedoch Place, near Park Circus. I went for a wander there, on a sharp January evening, to get a sense of her. The image above is of the door she would have opened each morning, before making her way to City Chambers or the Sherrif Court, or to meet the city librarian to whom she would donate her matriculation cards and other ephemera of her life to the Mitchell Library, where it remains, in Glasgow Scrapbook 5.

Violet Mary Craig Roberton came from a well-off family, with many privileges and many opportunities. She chose to use that privilege to try to better the lives of the people of her home city. She didn’t invent anything, discover anything or paint a masterpiece, but she was a hardworking and vital member of the civic realm of the City of Glasgow, and she deserves to be remembered.