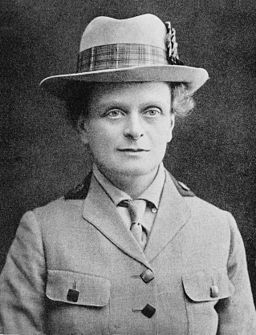 On behalf of WW100 Scotland, we have been asked to share this short video marking 100 years on from the death and the funeral of a remarkable, inspiring, and astoundingly determined woman, Dr Elsie Inglis.

After being told by the War Office ‘my good lady go home and sit still’ as women doctors and surgeons were not permitted to serve in front-line hospitals, Elsie offered her services to Britain’s allies.  On their acceptance, she formed the Scottish Women’s Hospitals (SWH) and together with her colleagues and associates from the suffragist movement between 1914-1919 raised the equivalent of £53m in today’s money to buy equipment and get their stations to the front line.

Seventeen Scottish Women’s Hospitals were set up across France, Corsica, Greece, Macedonia, Romania and Serbia to treat soldiers, as well as a number of satellite hospitals and dressing stations, manned by nearly 1,500 women.

You can find out more about Elsie and the SWH movement at WW100 Scotland.